Past exhibition
4 April - 4 May 2020
Open a larger version of the following image in a popup:

To commemorate the four decades of printmaking in Cape Dorset, Kinngait Studios published Cape Dorset 1959-1999, a print catalogue which celebrated the preceding forty years by including a selection of archival prints created in the preceding forty years. Parr’s Another Time was listed at $2,000 at its release in 1999, which was a record-breaking price for an Inuit print at the time of issue.

Another Time is highly unusual in that it is apparently a reprise of Parr’s The Hunters released only two years previously. In fact, we do not recall another time this has occurred with an Inuit print. Iyola Kingwatsiak cut the stone block for The Hunters, while the stone for Another Time was cut by Lukta Qiatsuq, another of Cape Dorset’s original four master printmakers. Overall the two treatments are quite similar, but there are some interesting differences. Iyola gave more emphasis to Parr’s distinctive intersecting lines in the 1962 print than Lukta did in this version — but keep in mind that Parr’s drawn lines are black, not white, and so do not stand out so starkly.  On the other hand, Lukta’s handling of the textural lines is more scratchy and irregular than Iyola’s; this is rather more faithful to Parr’s pencil strokes in the original drawing, in keeping with his work of the period 1961-62. In the end, though, both prints are brilliant interpretations of Parr’s energetic drawing style. 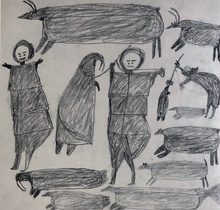 Parr’s original drawing is reproduced in Marion Jackson, Parr: His Drawings (Halifax: The Art Gallery, Mount Saint Vincent University, 1988) cat. 9. Not for sale with this print.

We will process the personal data you have supplied in accordance with our privacy policy (available on request). You can unsubscribe or change your preferences at any time by clicking the link in our emails.